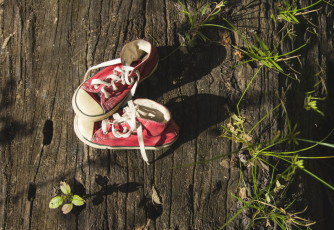 Let’s teach children how to tie their shoelaces!

For the children to learn the skill of tying shoelaces at the very beginning, you could make a special pre-made stencil for the children. Cut out feet prints (that are larger than life-size) from sturdy cardboard and make holes for the shoelaces. At the beginning you can use thicker laces but soft enough, with which the children will learn the basics of shoelace tying.

One side of the laces can be painted a different color, so the child would not get confused and would be able to understand, that the shoelaces should be taken from both sides.

A child would perceive it easier, if a teacher would be sitting right next to them so that the view point of the child is the same as the teachers.

Children can learn the art of tying shoelaces excellently by creating associations. For example, by imagining that they are creating bunny ears. When they have created two loops, both “ears” should be held between the middle finger and the thumb. Afterwards, the “ears” need to be crossed to create the shape of the letter “X”. The upper “ear” should be pulled through the bottom one to create a knot.

When the basics have been learned on the stencil, the children can start practicing with real shoelaces.