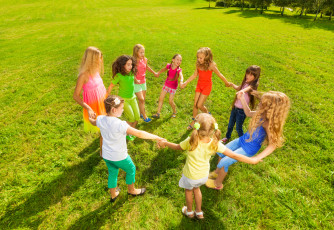 3 fun games, when spending time outside

The warm and sunny part of spring is fast approaching, and then children will spend more and more time outside. Here we offer you 3 fun games, when spending time outside.

Hula-hoop in a circle
Children are divided in two teams that stand in a circle, while holding hands. In each circle two children have a hula-hoop over their joint hands. Then, when a signal is given, they have to pass the hula-hoop around the circle as fast as they can. To do so, every child has to step through the hula-hoop, while still holding hands with the two children on the each side. The team. Who does it the fastest, wins.

Lawn mower
This game has to be played by at least three players. All you need is space and a rope that has one object tied on one end of it (for example, a small bag of sand).
The players stand in a circle, that, for the purpose of the game, is considered to be a meadow. The “lawn mower” turns the rope around them, a little bit of the ground (30-40cm). The children, who stand in the circle, jump, when the rope nears them. The players, who don’t jump in time, loose the game. The winner is the one, who stays in the game the longest and isn’t “mowed”. If the game is too easy for the players, it can be made more difficult, if the rope is turned around a bit higher.

Snake
Their hands on the waist of the person standing in front of them. The first player in the line is the head, but the last – the tail. The aim of the game is for the head to catch the tail, while not realising the hands of the players. The snake has to turn in different ways, so the head doesn’t catch the tail, but when it has done so, the tail goes in front and becomes the next head.
If the game is played inside, it can be made more difficult, if all of the players are sitting on the ground and they can only move while sitting.