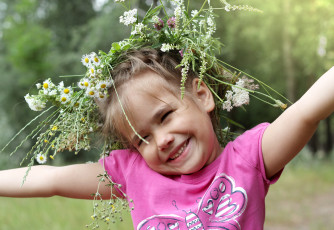 An easy game for children in celebration of Summer Solstice

Flower crowns, cheese, and staying up all night are the joys of children in the evening of Summer Solstice, however, it is worth teaching the littles ones that celebrations often can go together with different games.

“Šurp, Jāņa bērni!” (can be translated as “Come here, the children of Jānis!” – Latvians celebrate Summer Solstice the day when people whose names are Jānis and Līga celebrate their names day, therefore often in Latvia, these celebrations are called Jāņi or Līgo, and a lot of traditions and games involve these names; in other countries, this game can be played by saying “children of summer”, as it might make more sense) is an easy game accompanied by a Latvian folk song, which won’t be too hard for the little ones. This game or little dance will spark joy whether it is done with groupmates and teachers in the kindergarten or during Summer Solstice with family and friends.

All the participants stand in two lines facing, each line facing the other and step away so that there is quite a bit of space between them. People have to hold hands with the people beside them.

While singing the first part of the song, both lines step 4 steps towards each other and then 4 steps away. That has to be repeated 2 times. When singing the hook, the person has to hook their elbow with the person opposite them from the other row and spin.

The song can be repeated two or three times (or as long as you want).

The hook: (hook elbows with the person opposite you and spin around dancing)

Translation of the song:

Let’s sing in the meadow!

Until the late evening!

Both went to cut down Penny Buns

Couldn’t move the Penny Buns from their place.