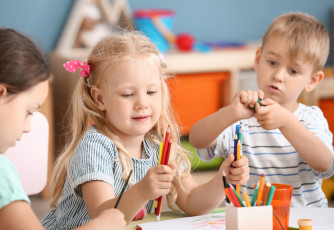 Why is it so important to arrive at the kindergarten on time?

“Being late for school or kindergarten is not the kid’s fault. It is the time management of parents,” says Viktorija Ozola, Montesori teacher, mom of five children and the creator of the blog www.espats.lv.

She shares her opinion on why it is so important to be on time, when arriving to the kindergarten.

Sometimes parents want to spend a peaceful morning with their children, and they bring them to the kindergarten a bit later, wanting the best for their children. However, that is not good.

Think about yourselves – when do you feel better – when you have time to prepare and settle in for the day or when you run into the office late, everyone else is already working and have formed their own little groups? You not only have not had the time to get everything together, focus and settle in, but you also end up being the odd one out, because groups have already been formed and everyone already has started working. The morning has not started with a cup of coffee, but has started with confusion and trying to understand, what am I, where am I and what have I already missed.

The same happens at school – you find out the most important information (what you’re going to do that day) at the very start of the day. If you miss that, then the rest of the day is spent with the feeling, that there is something you don’t know. It might seem as something unimportant – usually someone tells the child what has been said previously, but still there is that nagging feeling.

Would you like for your child to feel out of place? That the child feels as though something is not quite right? If that happens once or twice, nothing bad will come out of it, however, if that happens regularly, then it will make the child feel insecure. These children usually have lower self-esteem. And right now, they cannot control at what time they arrive to the kindergarten or school, because they are brought there by their parents, they depend on us. If we bring the child to the kindergarten late on regular basis, then we should think about changing something in our daily routine. If we cannot do that, we cannot expect the kindergarten to teach our children language, math. When they arrive late, the child is not as focused on learning – they do not have motivation to start doing something, because soon they’ll have the music lesson, morning circle, the walk outside or lunch.

If you bring the child to the kindergarten later, you shouldn’t think that they will be able to finish all work in the evening – in the late afternoon children are already expecting when their parents will arrive. Even if the child will be working, the work won’t be as productive as it could be in the morning.