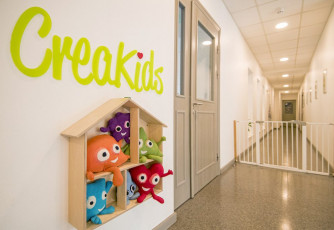 CreaKids10 years in Latvia! What does the first student of kindergarten think about that?

The private preschool “CreaKids” marks its 10-year anniversary this week. A special meeting in honour of this- with CreaKids’s first student, Nora. Nora is currently 11 years old and soon will start studying in sixth grade in September, but her experience in the kindergarten is still in vivid memory. Together with Nora, we looked at the pictures of the time in the kindergarten, reminisced in memories, and walked through Nora’s favourite places in her kindergarten. What Nora is thinking today about the time spent in the kindergarten as well as her experience there, read the article below.

Looking at one of the photos, which is very heart-warming for Nora and Nora’s mom, she says that she remembers the exact moment of taking the picture very well. She says, “When picture was taken, my dad was going through to gate to pick me. In my head I had one thought- dad promised me McDonald’s that day, I will eat McDonald today!” However, Nora points out that she likes the fact that CreaKids is all about healthy food in kindergarten, it certainly shouldn’t be change

The most valuable one brought with her from the garden

Nora still remembers and appreciates her teachers, some advices given by teachers, and even until this day she still uses them. She remembers that when she had to go to dentist, she was scared. The advice given by teacher Aiva was very helpful: “In such situations, you should simply close your eyes and think good thoughts.” Therefore, Nora always thinks about flowers and butterflies.

Teachers have made Nora feel special many times. As one of the most memorable moments, Nora mentions a trip with SUP boards along with teacher Sintija. Nora says: “So, once was a time, I don’t know why, but I guess I was a special child … one afternoon Sintija invited me to go with her and her husband to paddle boarding on SUP boards. Sintija was pregnant at that time, and I was the only child who knew that, and I think she hadn’t told the teachers either. I guess I was the only one who knew at all, and I didn’t say it anyone.”

Nora has a lot of stories with kindergarten teachers, and she herself says: “If someone asked who my favourite teacher was … I couldn’t, it would be very difficult to choose, because I liked each one of them.”

Friends- everyone knows it’s a great value, and so does Nora, because she met her best friends of today in kindergarten. “Yes, I spend much more time with the friends of the kindergarten th

an with my classmates.  For example, I didn’t go out with any classmates in a pandemic, I went out more with friends from kindergarten,” says Nora.

But the best place to meet your kindergarten friends is right in the kindergarten- at the sleepovers. Nora’s eyes sparkle when she remembers and talks about them. This is what Nora says about the sleepovers which, from time to time, manage to organize in the kindergarten rooms even a good time after graduating the kindergarten: “Mom is staying here with her group (Nora’s mom is now working in CreaKids as a teacher and continuing the tradition of hosting sleepovers with the children of her group), and then I invite my own friends from kindergarten, and we stay there as well. We have everything- kindergarten is filled with fun, because we are playing one particular game where in teams we are running through kindergarten and catching and as well trying to free each other. The game is played nonstop all night. Then we pick up the mattresses and go to watch a movie, usually order a pizza too.”

Nora says that 10 years for a kindergarten, it’s not that much, and to answer the question, what you would like to wish CreaKids on its 10th birthday, she says: “Let me think … I like the fact that CreaKids is such a great kindergarten. I don’t think there’s another kindergarten like that. There’s a lot of great stuff, for example, these earlier mentioned sleepovers and all sorts of cool activities. Then there were those workshops and pool that I liked very much … and I do not want them to stop doing it!”