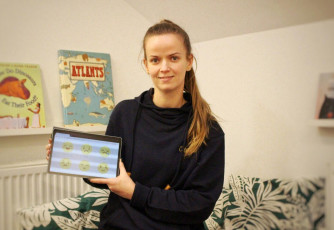 “Children should see other opportunities to use digital materials.”

Nowadays, it’s hard to escape from technology; therefore, it’s essential for children to show a way how to use them differently, not just by watching cartoons, movies, and playing games. For that reason, the project DLMT (digital learning materials and tools) has been developed. Santa Peipina, a teacher from “CreaKids,” shares her experience in the development process and how to use these materials.

Tell me a little bit about yourself. What’s your experience working with children?

I think I started working in “Creakids” in 2012 January as a teacher’s assistant, thinking that I am just going to work here for a bit. Then a few years passed, I had just graduated from Riga Technical College. I realized that working with children is really my call. Daina Kajina, head of “Creakids,” motivated me to become a teacher. She said, “You have to!” My first reaction was, “Me? No way! I won’t be a teacher.” Some time passed, I went to Daina and said, “You know what I did? I applied to Riga Teacher Training and Educational Management Academy!” Then, starting from 2014 or 2015, I became a teacher. I started working with little children in the smallest group. And now I’ve raised a whole group! Now, I’m currently working with the third group overall, but the first one I’ll be able to send off to school.

Tell me in a couple of sentences – what is The DLMT project?
DLMT stands for digital learning and methodological tools, it’s meant for teachers and children. DLMT makes everyday work easier for teachers, and it is supposed to motivate children to work. From my experience, I think it is true. Children are very interested, and keep asking for more and more. They are very curious, although the use of digital learning tools is minimal. It’s not like we give them the tablet to play games, but they get to see other opportunities to use technologies.

What was your role in building this project?
I was one of those who helped develop these materials, invented the exercises for children. From the beginning, I didn’t know what was going on, what I had to do. There was a lot of confusion, and I thought, why did I involve myself in this project that it was not meant for me. When I started actually doing and creating everything, I realized it was something cool, useful, interesting, something new for us and others who would use the platform. Still, of course, mostly it’s beneficial for children.

Tell me about one of the tasks you created?
One of the exercises created by me is “mathematical rhythms,” where children or educators have to turn the spinning wheel, then a certain rhythm starts. Children have to position themselves according to the mathematical rhythm using their bodies. For example, a boy, a girl, a boy, a girl – that’s the easiest level. A more complicated level would be  – one child has to stand like a pole (hands and feet straight), the other has to stand in a star position, creating a rhythm. The final level of complexity would be when three children have three different positions, each rhythm repeating.

How is DMML intended to be used?
I think they can be used at any moment, based on the situation, and just improvise. It can be used during the morning routine as a daily exercise. We’ve already tried it. My group is very fond of the “orchestra” game, where children are assigned an instrument, which they should represent when they play. For example, when the piano and flute are played, children who were assigned these instruments should imitate playing them. We also tried to measure the ‘temperature’ with emotions, which they also liked very much. During this activity, children press on the emotion they are feeling at the moment. In my opinion, older children are the ones who really are able to express their feelings and explain why they have chosen this feeling; that’s really significant. For example, the child is sad, not because he wants just to be sad, but he had a fight with his mom in the morning, that’s why he feels sad. Then we also discuss what we could do to make his day better. There hasn’t been much time to try everything because of the Christmas rush; however, I think when January comes around, when everyone in the kindergarten is a bit more relaxed, we’ll try something else. Everything new we offer children, they do with great interest and passion!

At times, parents think that technology for children, especially in kindergarten age, isn’t necessary. What do you think?
Yes, my opinion is quite similar. However, the use of these technologies is a little bit different. It’s not that we take a tablet, put it in the child’s hands, and watch a movie or play games. We only use technology in a small amount as an additional tool, showing the child that there is a different way to use it.

How do you think this will improve the learning process?
In my opinion, this will make it easier for teachers, because it won’t require as much time to prepare, for example, the same spinning wheel, given that it is already on the tablet, there is no need to create stencils, cut, fold. If it had to be made with paper, it would be very time-consuming. A lot of paper and other materials would be used. In this way, we can also save the environment a little.

If I understand correctly, these methods have only been tried out in kindergartens?
Yes, now DMLT are only at the trial level. Individual kindergartens have a chance to try it, and they have to write feedback – the pros and what should be improved. As far as possible, all of it will be corrected and improved.

Will DMLT be available only in kindergartens?
In the future, these learning tools will also be available to parents. It is also planned that if suddenly because of Covid – 19 we will not be able to come to kindergarten, the training process will be remote, using DMLT, so that parents can also work with children while being home.

What would you wish your colleagues who plan to use DMLT in their work process in the future?

I certainly wish them not to be afraid and try as much as possible. Try to understand what children like the most, and just follow modern technology. So that children would have these opportunities and have some idea of them when they go to school. I think that nowadays it’s hard to do anything without technologies or run away from them.  It is essential to show and teach that there is an alternative, and children can do it together with both educators and parents, and that it is exciting. Above all, don’t be afraid of the new and be creative!