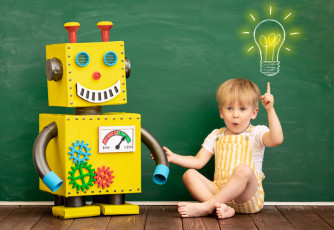 Digital technologies in kindergartens do not mean sitting across screens

Hearing the phrase “digital technologies in kindergartens”, a few parents get worried – does that mean, that our children will spend more of their time looking at computer screens? Linda Daniela, a professor at the department of pedagogy, psychology and arts at Latvien University believes that that is not the case. She believes that successful development of digital competencies can ensure wonderful career opportunities in the future.

Digital competencies can be learnt in multiple ways. That is why it is important to understand what exactly is meant by it. The two big groups, in which we can categorize these digital tools are the ones that have a screen and the ones that do not. Tools without screens are meant as the digital tools children use to learn something. These are the tools, because of which children might start to be interested in where sound comes on or later on with them children can learn the basics of programming and coding. These are the tools on which there should be an emphasis during pre school education.

“At the university we have projects, which we create, so that children who are at the age where they can attend kindergartens can develop algorithmically analytic thinking,” says the expert. She also is ready to showcase real life examples – a special book and a digital pen, with which you can read information. As another example she showcases a toy called the Little Bee, which has arrows on it. With this toy children have to learn how to press the right arrows so that the Little Bee gets to where it needs to be. With that children learn the basics of coding. And in this process no screens are involved. Another great manner of learning about digital tools and technologies are robotics classes. “In later stages also a screen appears in these classes, where you have to join different colored squares, where one of them represents, for example, a movement to the front, then you add numbers, that dictate how fast the movement will be. And that is how the child learns how to code,” says Linda Daniela.

For now it is not a norm for kindergartens to have digital tools and teachers are not taught how to use these tools to educate children.

Hearing about digitalization in kindergartens, parents can start to worry – will their children now spend more time at computer screens. On one hand this worry might be legitimate. One of the reasons why might be the fact that at times parents also offer children the use of digital tools at a young age, seeing as they might make watching over them a tad easier. Seeing as children already might use these tools at home, parents are worried that, if it happens in the kindergarten, it might be too much. “If we talk about these screens, they do have their bad side effects that are talked about worldwide. And the reason why, is that children usually fixate on one thing on the screen. However, we can’t look at it only from one side – digital tools have a lot of good things that children can learn, for example, colors or letters. Parents can wonder why we should use digital tools, if there are old methods that work just as well. Coding can also be learnt without any special tools, just by developing children’s movement and sense of spatiality. The challenge is within the fact that sooner or later children will have to start learning how to use different technologies and tools,” explains the professor.

Digital generation has to learn how to use digital tools

At the start of the 21st century Marc Prensky defined what is a digital generation. At that point everyone assumed that children from this digital generation will know intuitively how to work with digital tools. “Now a certain time period has passed and we have understood that children have to be taught how to use smartphones and other digital technologies and how to find value within them step by step. Similarly how we teach children what to do with a knife – not just throw it around, but carefully cut, for example, a cucumber,” says the professor.

There is a belief that, if we introduce development of digital skills as early as kindergarten, children will be more sensible and knowledgeable users of these devices, because their knowledge base will be enriched with new knowledge and skills. At the same time, if children start using these devices during the first years of school, nothing bad will happen either. However, we should take into account that a process similar to, for example, learning letters might occur. Children, who will have learnt how to read earlier, will be able to read better at school as well. Similar situation happens with digital questions – if there will be children, that will have acquired digital skills earlier. they will be able to use these devices better than their peers, who will start this learning process later. If that is not treated with the needed attention, child’s motivation and self esteem can be harmed. That means that the process of digitization ideally should take place at the same level at all kindergartens. “Obviously, we are not talking about two year olds or three year olds, but about older kids. At the same time we have to remember that the world won’t become less digital, if we won’t allow children to use these devices,” expert summarizes.

Seymour Papert created a coding language for children called LOGO, as well as he is the creator of Lego Mindstorm philosophy. His belief was that children should learn about technologies not only as users, but also as programmers and learn how these technologies work and function.

When a children’s brain develops, they at first are able to focus on one object, at later age on two and so the number of objects a child is able to focus on gradually increases. On a smartphone, for example, there are multiple things at the same time that require focus, therefore, there is no sequence happening in the development of the brain. By using smartphones, tablets, computers, a child learns how to perceive something quickly, but for a short time. However, when children learn, we want their brains to be able to store more information. If digital tools are used incorrectly we train short term memory. These kinds of problems do not usually occur, if the time a child spends at a device is limited. “It is also important to understand what the child is doing while using the device. For example, a parent can offer an application for learning letters. That is great, but what will happen next? Recently I did research on applications of museums from the educational perspective. The conclusion was that the education aspect is very poorly executed. Because not only the factor of entertainment is important, but also exercises, testing knowledge is crucial. There we need a teacher. And that is true in other forms as well – if we decide that children need a tablet for learning letters or colors, it is important what happens next. At this stage at a kindergarten we usually have a teacher close by,” explains Linda Daniela. Unfortunately, there are very few applications a teacher could valuably use for work with children, if he or she decides to use technologies and offer exercises.

Too much time spent with the device, if a parent lets a child use the device for too long and does not monitor the content their child engages with.

Experience of other countries

If we look at Scandinavian countries, they also believe that we can offer digital technologies to younger children. However, in Scandinavia they do not talk about screen time, but about digital tools, through which something can be learnt. Yes, that can also be a screen, where something interesting is shown, which is more challenging to recreate in a book and impossible to spot in nature, but at the same time a child is doing something else as well. However, Italy is special with a developed robotics field. At first those were private initiatives, but now they are integrated in the studying process nationwide. “Through robotics they teach children – if I understand how a sensor works, I understand, that an elevator actually is a simple mechanism. Those who work with digitalization in Latvia should think how we can be one of the leading forces in this field – so that we are not the working force, but inventors and developers of new projects. A target for everyone to reach together is that children are the ones inventing robots, not servicing them,” shares the expert.

The Ministry of Education closed a competition for the development of digital studying tools. Entrepreneurs were able to submit a wide range of proposals. The problem is that in Latvia there are not many businesses that work with that, and purchase of these materials is expensive.

The most challenging aspect is that to create one tool like this calls for a lot of work – not only the product has to be developed, but also the exercises, tests, tasks for teachers, etc.

In the department of pedagogy, psychology and arts at Latvian University there is a plan for a new study programme at the graduate level about technologies in education. Within the programme lectures about cyberpsychology and digital technology pedagogy are planned.

What can a teacher do now?

Teachers cannot do a lot for the development of digital technology skills in kindergartens for the sheer fact that kindergartens do not have the needed equipment. There are teachers, who have the opportunity to use screens to show something, for example, it is one thing to see a mole rat in the book, but it is another to see one in a video, but it is important to realise, that those are digital tools with which children won’t learn algorithmically analytic thinking. To lead a child to this kind of thinking different tools and methods are needed. “We can optimistically ask teachers to do it themselves and take initiative, but in reality they lack knowledge and resources. If we purchase something for kindergartens, we need to understand what to do with it and what can be taught with it. There is no use for purchasing digital tools for children to play with a couple of times,” says the professor.