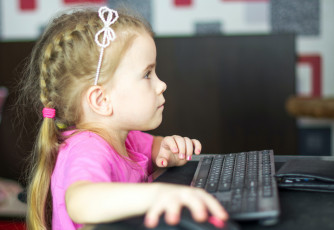 Digital skills for children. It is not watching Youtube videos!

“We have to stop the thinking that, if a parent gives a child a phone and the child starts pushing buttons, he or she is advancing their digital skills!” direct is a father of three Pāvels Jurjāns, an IT specialist. Additionally, not only is he critical of the way how a lot of children use digital tools right now, but he also gives specific suggestions, how to advance digital skills of children with the added value it can have.

Pāvels, who a while ago created a children’s gaming platform www.manaspēļukaste.lv, is raising three children – a 17 year old, a 15 year old and a 2,5 year old. He has found specific ways, how parents can help and advance their child’s digital skills. Even though this phrase “digital skills” has been heard often, people also often wonder what it really means – a possibly awkward question, seeing as so many are already talking about it. As Pāvels admits, that is not really an easy questions to answer.

“My observation is that a device is often given to the child so that the child remains calm. That is a serious sin, because any processes of learning happen only when a child sees motivation. Devices are a good step towards excellent content, however, we often reduce it to an incredibly easy approach. When talking about digital skills it is very important that the time a child spends with technologies is not filled with just watching song videos, cartoons or dragging their finger mindlessly across the screen – these actions do not require or advance any particular skills,” says Pāvels.

What are digital skills?
“I think that often people misunderstand what digital skills are. Watching Youtube videos is not a digital skill! Youtube is a tool created to sustain a consumer’s attention, so that the consumer spends as much time as possible on the site. Also a game, where a child only has to drag their finger from one side of the screen to the other won’t exactly be advancing any digital skills – a child can also drag their finger across sand and that will be a much more exciting experience. Dragging a finger across a screen of a tablet – there is nothing digital in that! Digital skills are nuanced activities and for adults they can be divided in such skills as coding, creating music, editing photos, creating designs, editing text. Those are specific skills. However, for children digital skills can be the very basic technical abilities in using devices (and not just such things as smartphones!). It is definitely harder to define specific skills for children, however, here things like rituals within the devices can be counted in, for example, understanding that there is a limit to using these devices can be a digital skill. For example, for a child to understand that computer cannot be used in the evenings – that is a part of digital skills.”

For the learning process to be affective:
• Child has to see it as an adventure
• There has to be a clear goal
• A child has to have motivation

1. Coordination of hands and the screen
One of the first skills that a child can learn in working with a computer is working with the computer mouse – something, that is slowly becoming rarer and rarer even at home. “It is a very complicated thing! By moving a hand and fingers, the movement happens on the screen. I have observed, that sometimes it can become even like a battle for the child, however, it is important not to try and facilitate that battle. The victory has to be achieved by the child!” Pāvels encourages. He points out, that the work with the mouse is complicated, however, dragging a finger across a tablet – that doesn’t require or develop any special skills. Digital skills are not pointing a finger in the right direction – a child has learnt that before.

2. Work with a digital pen
A tool that looks like a pen and is connected with the tablet can be useful – it will advance grip, coordination of hands and will point to a correlation – what happens, when this tool is placed on the tablet, what happens when it is pressed harder or lighter. Parents have to keep in mind that these things can be fragile, unless especially resistant tool has been bought.

4. Communication with the device
“This is also a philosophical skill – that a device can give out and receive information. For example, at the very start it can be a very basic coding, when deciding different aspects of animation, for example, choosing the colour of a car, the type and making it drive across the screen. Understanding, that it can be controlled is another important thing – a computer can be given a task and we receive the wanted result,” Pāvels says and highlights, that adults use this skill all the time, but usually that is subconsciously done, for example, solving complex equations on the calculator. Press a button and the device gives you the answer. That also is communication, a conversation.

Important!
When introducing the learning of digital skills in kindergartens, it is very important to critically observe and assess the feedback – how are these kinds of lessons going, are they successful. In any new project, feedback and assessment of the results are necessary. At the same time, while thinking about children’s digital skills, it is important to understand that a child also has a body, an organism, which needs enough motor development. “The fact that children need to run around and work with their hands is still here. We have to invest energy into children’s motor development and definitely the two – digital and motor development – should not be placed against each other,” Pāvels reminds. However, parents also should decide, which practical activates can be replaced by digital, “I think, that a reading a bedtime story in the traditional way is a lot more of an enriching experience than a bedtime story told by a screen. If a screen tells a bedtime story, the child becomes passive, possibly, in an unhealthy body position, maybe the child will want more time with the screen and it is time, that could have been spent with parents,” Pāvels remarks.

Do learning apps encourage learning?
Often different educational apps are used to teach children colours, numbers or letters, for example. As Pāvels highlights – that won’t be as much of a digital skills approach, as it will just be an educational experience. “If we assume, that a child has already learnt specific digital skills and basic user interface things, he or she can start enjoying the content. If we talk about education content, for example, math, child first of all has to be given the chance to count apples in real life and only later move on to counting abstract objects. The latter can create a false sense, of what the child has learnt – he or she can answer ideally to questions, for example, a 2,5 year old can learn to count to 10 as a rhyme, however, that does not mean that the child understands, what those words mean,” Pāvels shares his opinion. However, he also mentions specific skills, that can be learnt by using applications on smart devices – a child knows how to turn the device on and off, possibly, knows the passcode, understands the concept that under those little pictures hide applications and understands how to open them and use their interface.